The planning team reached out to the community through three public meeting events, paired with online surveys to allow community members who could not attend to give feedback. In addition to traditional in-person public meetings and online surveys, each community event featured an innovative outreach that is specifically designed for each stage of the planning process, and provided residents an appropriate platform to give feedback that would guide the planning recommendations to best serve community residents’ needs and desires.

The second public meeting asked residents to play an interactive game for planners to get feedback on what kind of amenities in which residents want to invest.

Residents received a ‘wallet’ of RoxBucks, and visited six stations to select their preferences. Each station offered options for various community amenities, funding, and improvements, or the option to withhold funding to keep parks the way they are today.

To demonstrate potential concept design for neighborhood parks, virtual options featured were play equipments for different age groups, nature play, shade structure, grills, and seating areas. The planning team set up a station to allow community members to tour the future park in virtual reality. Virtual reality model allows community members to have a better understanding of what potential neighborhood parks could look and feel like, and experience the park in real-time before its built.

Check out 3D Tour in Your Browser

The May kickoff event at the Community Park focused on listening and gathering some initial community input. Residents were asked to provide input on their favorite and least favorite outdoor amenities and open space locations, and to share ideas for new amenities, activities and events. For those not able to attend, an online survey was made available.

It was clear that residents of the community love their trails, open space, natural beauty, and access to nature, but some believed a few things were lacking. Input received from the first community meeting and the online survey revealed that 60% to 70% of respondents are satisfied with the parks, open spaces, and streets.

It was evident that a vast majority of respondents regularly use the trails along Little Willow Creek and the adjacent parks.

The 265 respondents expressed a strong desire for a pool or community center, water features, nature playgrounds, and new programs, including a farmer’s market, and concerts in an outdoor amphitheater.

Respondents also expressed interest in additional shade structures and a variety of play features for all ages. The general theme was interest in programming and amenities that encourage social gatherings, such as concerts, markets, and a potential pool.

We asked what new amenities the community desires and below is a compiled list based on their votes. 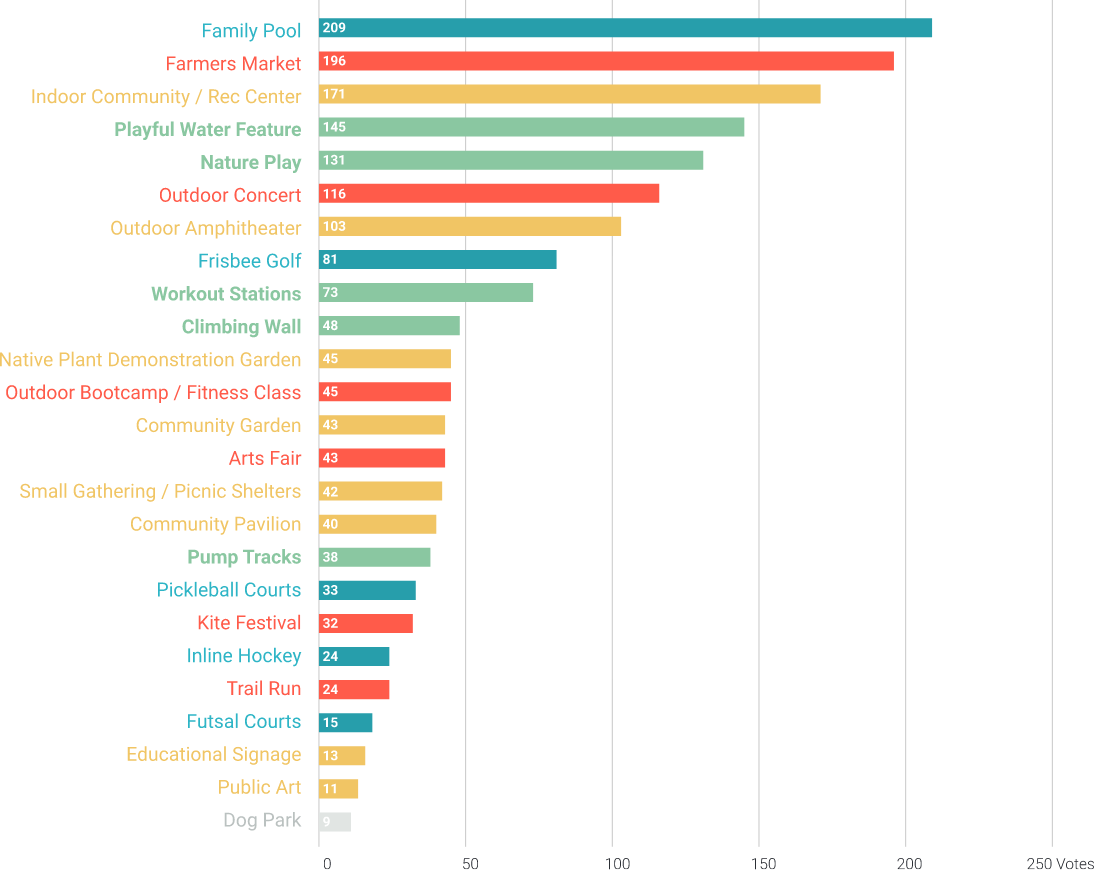 Although people use the District’s open space regularly, there is a clear desire for a central community hub in the form of a community pool, recreation center, indoor community center. The community is more interested in programming and amenities that encourage social gathering, such as a farmer’s market and outdoor concerts.

The District hosted a second community meeting to get input. Residents’ input from the first community meeting, as well as survey results, indicated the community’s interest in a pool, improved playgrounds, enhanced open spaces, and new programs such as a potential farmer’s market or community concerts. 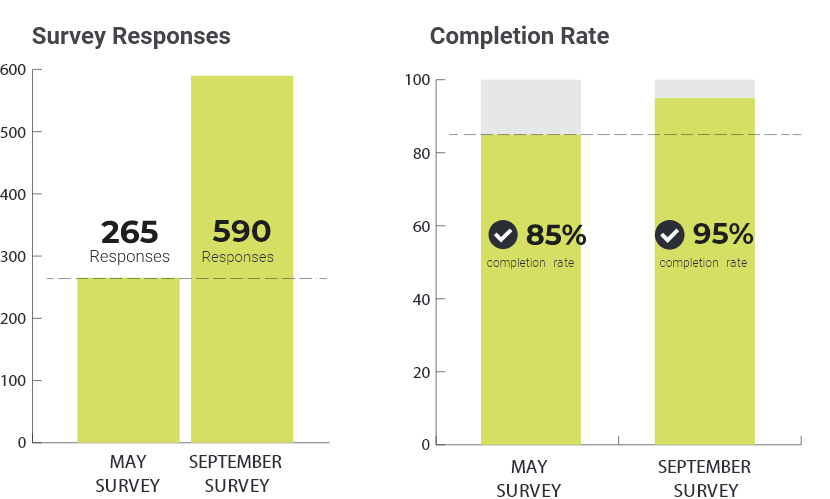 The September community meeting featured an interactive exercise where residents were asked to select their preferences for community open space amenities. As part of the exercise, residents were asked to decide if they wanted to invest in a new community pool, neighborhood parks, trail connections, open spaces, and additional community events like the Fall Festival. Turnout and feedback was fantastic and the second community survey received 590 responses, which was a 100% increase from the first survey.

Percentage of Selection for Each Topic

Average Selection for Each Topic

After calculating the average funding allocation to each topic (by finding the total sum of each topic and divide by total number of respondents), the community desires a degree of change that is slightly less than level 1 for all categories. General definition of level of changes below. Improvements vary by topic, refer to survey for more details. 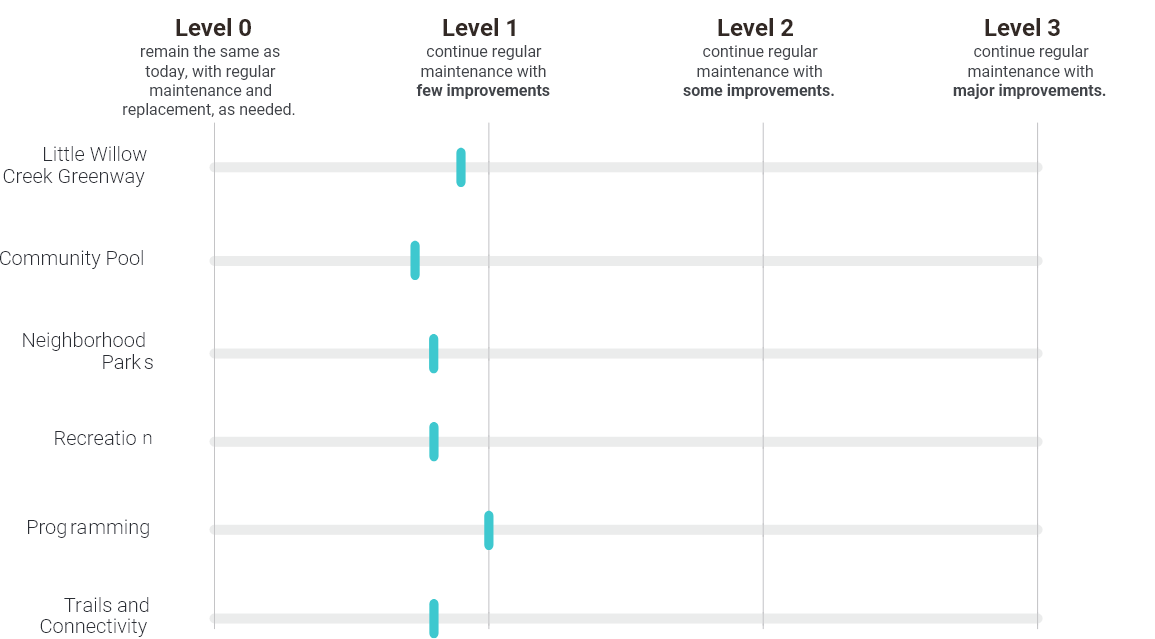 The community residents were asked to rank their level of agreement regarding each recommendation, such as providing trail connection to Chatfield State Park, adding play equipment for various age groups in neighborhood parks, and potential future community center and/or pool locations, so the District Board could better gauge the community’s interests. 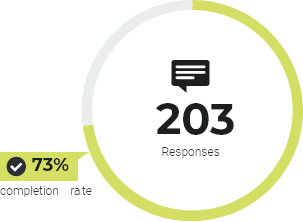 Average Selection for Each Topic

More than 75% of respondents agree with goals & objectives recommendations, and show strong support to enhance, connect, reinvigorate, and implement the District assets.

Respondents generally agree with preliminary recommendations and both site options. However, there is a stronger disagreement towards placing the pool at Potential Site 2) Open Space South of Safeway.

More than half of the respondents strongly agree or agree with preliminary recommendations for Community Center and Pool Scenarios, and agree that an additional feasibility study should be completed to determine the preferred size, programming, and site.

In general, respondents supported the scenarios that included a pool over those without a pool. Scenario 2, which provided a pool and full community center, received the greatest support.